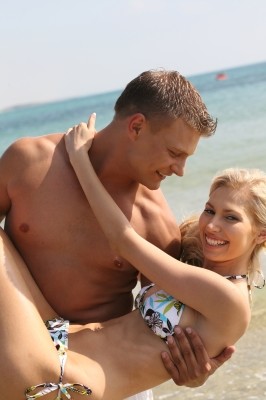 It seems the British weather is not the only thing heating up, whilst the UK is in the midst of a heat wave with temperatures hitting 30-degrees in parts of the country, leading extra-marital dating site IlllictEncounters.com is reporting record numbers of members visiting the site after the sun has set.

The amount of members logging on during the hot summer nights has almost trebled in the last 10 days, and with the unusually high temperatures set to stay until at least the end of the week, the website is predicting the number of people looking for some ‘Summer Lovin’ is set to increase further.

Spokesperson for IllicitEncounters.com Rosie Freeman-Jones said “When it’s hot outside you are more likely to feel frisky, the science behind this phenomenon is, as your body is exposed to sunlight, it produces more serotonin and melanocyte stimulating hormone known as MSH, which is linked to an increased sex drive in women, and serotonin just makes you feel happy.”

When questioned female members said they were most likely to look for a extra-marital lover in the summer months as they felt more attractive, tanned and could wear more seductive clothing, men also preferred going out in the summer months and feel less inhibited and more relaxed when outside in the sunshine and the heat.

The sites members have also reported large increases in the number of after work and evening dates that are occurring with the lighter summer evenings producing the perfect time to meet up with their new inamorata or inamorato. The biggest increases in the number of risqué rendezvous were reported in the South West and East of England where temperatures hit their peak.

IllicitEncounters.com is the UK’s largest and longest running dating site for married people. With over 820,000 members across the UK, you’re sure to find your perfect match.