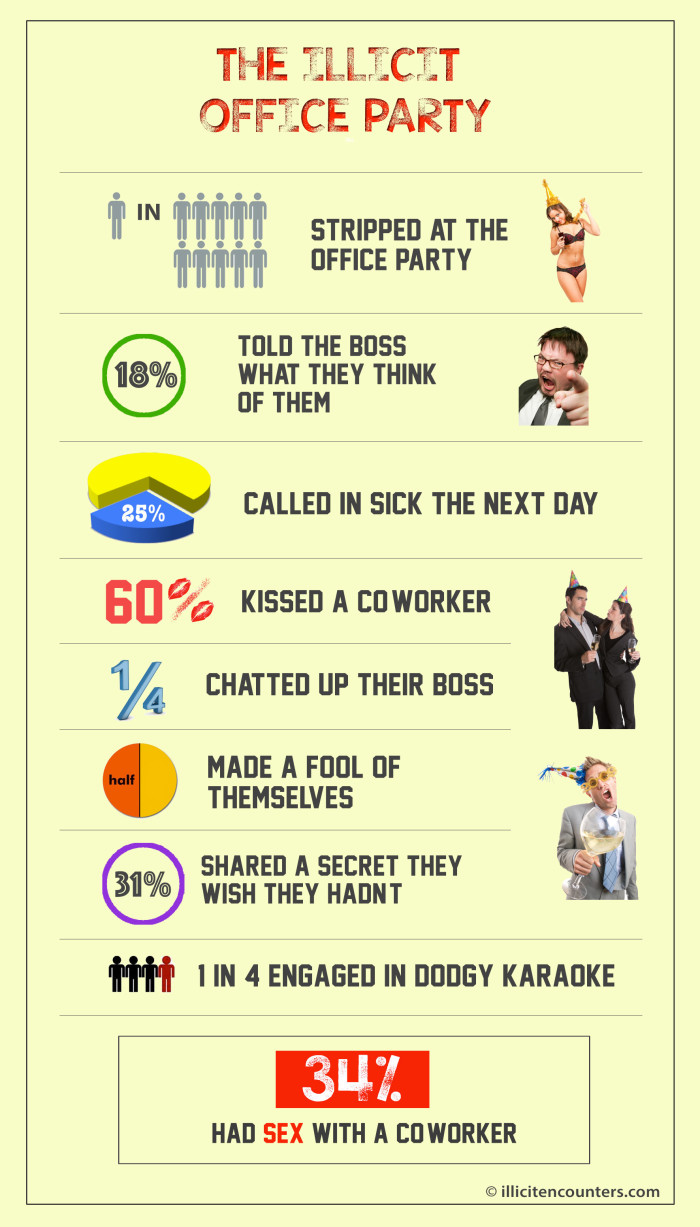 The office Christmas party season has arrived and a new study of over 1,500 workers conducted by leading married dating site, IllicitEncounters.com, has revealed a shocking 34% of workers have admitted to sleeping with a co-worker whilst attending their company’s Christmas party.

The study also showed that over 60% had drunkenly kissed someone they work with, and nearly a quarter of people (25%) admitted to calling in sick the next day with a hangover. Possibly clouded by alcohol – 18% made a poor career move and used the Christmas party as an opportunity to tell their boss exactly what they thought of them, while 25% had decided it would be an appropriate time to chat them up, perhaps trying to secure a pay rise or bonus.

Spokesperson for IllicitEncounters.com and relationship expert: Mike Taylor said: “When you work with someone day in and day out you can sometimes form close bonds – mix that with the Christmas party environment where alcohol is flowing freely and people become relaxed and uninhibited, that is when you are most likely to make compromising decisions and could do something you end up regretting, like chatting up your boss or even sleeping with a co-worker.

People can forget that there can be long-term ramifications to having a romantic relationship within the work-place. In a recent survey of employers, over 80% admitted that having an office based romance would affect the career prospects of those involved.”

Other activities staff confessed to doing at the Christmas party included 10% who had stripped off, 31% had confessed a secret to someone they wish they hadn’t, and 26% had engaged in some dodgy karaoke. Whilst over half of party goers revealed that they had done something embarrassing and made a fool out of themselves in front of their peers and superiors whilst getting carried away in the festivities.

IllicitEncounters.com is the UK’s largest and longest running dating site for married people. With one million members across the UK, you’re sure to find your perfect match!

Established in 2003, we have been providing a meeting place for like-minded married and attached people for 12 years. Our members have one thing in common – they are all looking for a little romance outside their current relationship. Whether that’s the occasional bit of flirtatious chat, a regular coffee date, or a full-blown affair, that’s up to them.