Look away now fellas, as nearly a third of you (31%) would cheat with a close friend’s partner! That’s according to a survey by IllicitEncounters.com, the UK’s leading dating website for married people, who asked their male members whether, if given the chance, they’d cheat with their best friend’s partner.

Spokesperson for IllicitEncounters, Christian Grant, explained: “The idea of a ‘bromance’ only goes so far. It’s all well and good saying that you’ve got your friend’s back, but, when presented with the opportunity, a significant amount of men abandon all code and loyalty, acting purely on instinct.”

An anonymous respondent shed a little light on the situation, stating: “The buzz from the proximity/danger would be amazing,” before adding that “it would be difficult to maintain that relationship for any length of time.”

The survey also found that, astonishingly, 17% have already cheated with a close friend’s partner, with this respondent describing his experience: “She was hot. We were both frustrated with our home lives. We had the perfect excuse to see each other often. In terms of the experience it was great whilst it lasted. Very intense physically. It became more difficult though as her relationship was breaking down from both parties’ perspective and I felt she was looking for more from me.”

Another added: “We always flirted and laughed so when her husband went away I took her out one night and we ended up in a delightful 5 year-long affair.”

Grant adds: “It might be shocking to some, but things of this nature happen all the time, and not just to a guy that you know – everyone is susceptible. Heck, just look at Simon Cowell. Sure, he’s not proud of what he’s done, and he probably knew beforehand the potential implications of sleeping with his best friend’s wife, but that didn’t stop him – now he’s a father, albeit a happy and proud one.”

Interestingly, IllicitEncounters also surveyed their female members, posing the same question. In complete contrast to the men, only 12% of women claimed that they’d cheat with a close friend’s partner, with just 10% admitting that they’d already done the deed.

In fact, the general consensus amongst women was that friendship was far too precious to risk for an affair. An anonymous respondent said: “Never make love by the garden gate, love is blind but the neighbours ain’t!” As one respondent put it, “some things are sacrosanct. Friendship is one of those things.” 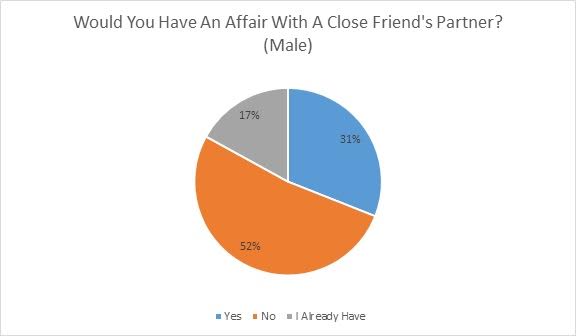